If science is going to save the world, we need to make it open

The last few weeks have been a momentous time in the sciences: not because of a breakthrough in gene therapy or quantum computing, but because world leaders have twice called for scientific papers to be made freely available to all.

On Friday 27 May, EU ministers of science, innovation, trade and industry published a progressive commitment calling for full open access to scientific research by 2020. Then, last week, US Vice President Joe Biden announced the launch of an open-access cancer database – a first of its kind – to allow researchers to better understand the disease and develop more effective treatments. The aim is for researchers to have information at their fingertips. Two petabytes of genomic and clinical data have already been released to the public.

While Carlos Moedas, the EU’s Commissioner for Research, Science and Technology, calls it “life-changing” for Europe and a “major step forward”, Doug Lowy, acting director of the National Cancer Institute in the USA, described it sharing medical data openly and freely as “transformative”.

So why is this model so important?

The gatekeeper approach to scientific publishing

Until the beginning of the millennium, scientific publishers operated a subscription model, whereby they charged universities money for subscriptions. They controlled what research would be impactful and significant enough to warrant publication. In some cases, universities can be charged up to $25,000 a year for a single journal subscription. Taken together, a large institution could therefore pay millions a year for all of the journals in its library. This cost is often borne out by students.

Researchers submitting papers to traditional academic publishers do not get paid and they hand over their copyright. This means that traditional publishers get their articles, their peer reviewing (vetting by other researchers) and even much of their editing for free. Yet the material they publish was commissioned and funded not by them but by taxpayers, through government research grants. Yet the public, under this model, are denied access. Anyone not affiliated with a university must pay the publisher for the privilege for a limited licence to read a single article.

Authors can submit their manuscript only to one journal at a time, feeding into an industry with profit margins of between 30 percent and 40 percent and annual revenues of about $9.4bn in 2011 worldwide, while the science remains behind a firewall.

But this model is being disrupted. With digital publishing, Academics started moving online, creating their own publishing forums and finding ways to freely disseminate the results of their research. In 2002, the Budapest Open Access Initiative was released, publishing the principles of open access, and the movement finally had its official name. Shortly after followed the publication of the Bethesda Statement on Open Access Publishing and the Berlin Declaration on Open Access to Knowledge in the Sciences and Humanities. A breakthrough was achieved when the second largest charitable foundation in the world, the UK-based Wellcome Trust, required all Wellcome-funded research to be published as open access in 2005. 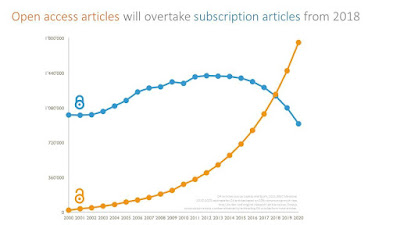 In 2003, the UK's House of Commons science and technology committee released a report recommending that government funding agencies should require open access to publicly funded research. And in 2005, the Research Councils UK (RCUK) introduced a requirement for open access.

In the meantime, the first successful open-access publishers, including BioMed Central and the Public Library of Science (PLOS), developed a new business model in which academic institutions pay for their researchers’ articles to be published online, thereby granting open access to the latest research to anyone with access to the internet.

The state of science publishing today

So, where are we now? Two thirds of the world’s journals offer an open access option, meaning the tipping point has been surpassed.

Unlike traditional publishing, the costs for open-access publishers are far lower as they have no costs for paper or printing distribution, averaging around $2,000 compared to approximately $7,000 for each subscription article published.

Importantly, open-access publishers are innovative, having created a series of digital services that are impacting the way scholarly publishing is evolving. At the Swiss-based open access publisher, Frontiers, for example, we have introduced an online interactive peer-review forum, allowing authors, editors and reviewers to interact in real time to help scientists hone their manuscripts so the best research gets published.

New ways of measuring the significance of any research published, including article-level metrics and author-impact metrics, now allow for science to be evaluated by the community in a much more unbiased and transparent way whilst providing full access to anyone who is online.

This is an important step towards equality within the scientific community, by scratching away at the bias towards US and EU-centric views of our understanding the world, connecting scientific communities and allowing them to exchange data and research findings freely.