Are citation rates the best way to assess the impact of research? 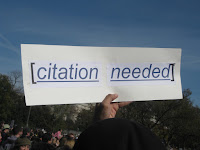 The traditional starting point for considering the scientific impact of research are its citations. This is how many other research papers and editorials subsequently cite a given paper into the future or in a given number of years since publication.

It would be unreasonable and misleading to conclude that a leading researcher in a small field had less scientific impact than one in a big field. Also, as can be seen from this table, a paper that has been published for a short time has naturally had less time to be cited than one that has been out for longer.

For these reasons, citation analysts use the normalised citation impact (NCI) to adjust citation volumes in different fields. This allows them to be compared in analyses of entire research funding schemes, national research and international activity.

The MRC report provides a graph showing the NCIs for all MRC-funded research publications for the sample period 2006-13. The average NCI citation for all papers in health and medical fields across these eight years was a desultory 2.08. And this was more than twice the world average.

The report notes that of more than six million papers, more than a fifth (21%) had not been cited, while only 3% of the MRC funded research had no citations to date.

What counts as a high and very high citation in the MRC data is also interesting. “Highly cited” means a paper with just four or more cites and “very highly cited” is anything with eight or more.

The situation in Australia is more opaque. A 2013 report provides lots of comparative data that show Australian health and medical researchers punch well above our weight compared to other nations and our small population.

But nowhere could I find comparable data to that provided by the MRC report. However, the NHMRC report notes:


The citation distribution among publications is very skewed. While very few publications achieve high citation counts, a vast majority receive very few or no citations at all.

Citation is of course only a measure of interest in your work by other researchers.

Journals that provide all or some of their papers as open access to anyone, often have daily updated counters showing the number of readers who have been to the publication. Not all of these will have read it and only land on it in a search for something else, so the data exaggerate actual readers.

My most read paper is one looking at the incidence of gun massacres and deaths ten years after the 1996 Australian gun law reforms.

Ironically, the paper wasn’t funded by any research grant.

A metric increasingly being used by researchers since 2013 to demonstrate wider interest in their work is Altmetric.

The Altmetric score provides an index of the extent to which a research paper is being circulated and discussed on social media and covered in the news media.

The MRC report provides data on a range of social impacts that go well beyond metrics. The data assesses the direct impact of research on outcomes that may have social and economic impact.


In work we published in 2015 examining the “impact in society” of intervention research in health and medical research funded by the NHMRC, we found 38% of research projects could demonstrate some level of social or health service impact.

We investigated the characteristics of those projects that demonstrated impact and compared them to those that didn’t.

Our study indicated that sophisticated approaches to intervention development, dissemination actions and translational efforts, are actually widespread among experienced researchers, and can achieve policy and practice impacts.

However, it was the links between the intervention results, further dissemination actions by researchers and a variety of contextual factors after the research that ultimately determined whether a study had policy and practice impacts.

Given the complicated interplay between various factors, there (alas) appears to be no simple formula for determining which intervention studies should be funded in order to achieve optimal policy and practice impacts.

The judgement of which research applications should be funded is, and is likely to remain, a very inexact science.