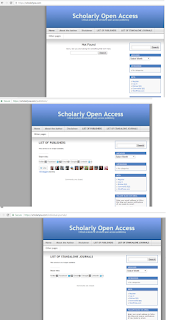 On 15th of January 2017, it has come to our attention that Jeffrey Beall’s blog (https://scholarlyoa.com/) was shut down for  unknown reasons. It could be due to lawsuit of US government or simply someone might have hacked it. Whatever it is, his attempt and movement, in general, have been questioned by leading scholars around the world (see previous posts on this blog) and his personal views and opinion are not favored anymore. In lieu of this, people, universities and institutes  would prefer to rely on consolidated lists released by organizations such as DOAJ, SCOPUS, Thomson Reuters,PubMed (Medline) and other leading indexing services. A journal/publisher would be a potential venue for publication if their ethical practice has been approved by COPE or any other similar organizations. ( for further info see: Choose the right journal for your research http://thinkchecksubmit.org/]

It seems that the shutdown of Beall’s blog has become a hot issue on twittter today (#Jeffrey Beall – https://twitter.com/search?src=typd&q=jeffrey%20beall). Some have expressed their concerns on mysterious disappearance  of the blog and its content, others are worried  and not comfortable about the announcement we made. Nevertheless, it is quite peculiar to see that no one is asking about Jeffrey himself, which is our utmost concern at the present time. We never consider him as a foe, rather someone who has devoted most of his life to disclose the fact behind publishing, be it open access or pay toll journals, though his approach is not professional and have been challenged over the time. Regardless of his strong positions (right/wrong), he is a human being and the academia owes him too much. It is suggested that people should start asking where he is. Is he safe? why does not he respond? What has happened to him? Attempts have to be made to discover the fact very soon, if you claim to be a true follower of him. There are dozens of copies of his blog on the internet and it is unnecessary to dig and republish them. What matters now, we believe, is Jeffrey  himself.

@Lacey E. Earle @CabellsPublish: Jeffrey Beall, whom we all we know very well, is not someone to be afraid of threats. Lots of them have already been around for the past few years. (see legal threats, https://en.wikipedia.org/wiki/Jeffrey_Beall). Everyone must stop speculations and convey the facts, if they can. “Cabell’s is in no way involved”  has already been tweeted. Completely opposing views, however. Interestingly no further insights are given.

Vanishing mysteriously and simply wiping out  the blog, facebook account and the academic profile is not what academicians were expecting to face all of a sudden. So many have trusted him and used his lists, but it sounds all have been in vein. What is the distinction between Beall’s lists and those unethical journals which have gone dark over a night. He is an only individual, perhaps does not believe in teamwork, behind the operation and ostensibly an individual-based work won’t last too long. It was crystal-clear that a single handed  challenging work (partially illegitimate and biased) through sever attacks on individuals, journals and publisher along with unfounded and baseless allegations and harsh tones (regardless of OA/Subscribed) won’t go too far. No guarantee and No warranty!

@A truly wonderful analogy, Disappearance of MH370 vs. Jeffrey Beall

All are impatiently waiting for him to drop a line and respond to clear off the baffling situation.

‘CU Denver spokesperson told ScienceInsider that Beall made a “personal decision” to take down his list’. So if the establishment and managing the the list was for personal reasons, opinions and  views were personal, and finally the shutdown was due to personal decision, why would the public be concerned about the disappearance of his blog? The academia might have been fooled to some extent by trusting him.

While Jeffrey Beall’s Blog is down and there is no reaction from his side (some expected to see his immediate reflection from his Twitter account) , we decided to list out probable  reasons why Beall’s list (questionable journals/publishers) should not have been considered seriously and subsequently it should not be used as a reference point any more in the future.

At this point the cause of shutdown is not clear, but many believe the lawsuits prompted the shutdown and this makes room for alternative organizations like OASAP and DOAJ to lead the mission properly. For now, it is advisable to consult with thinkchecksubmit.org before submitting a paper for review and publication.

Some reasons;
Our stance:

One of the missions of this blog is to share reflections on Beall’s movement and we basically document these reactions and republish them. All published posts are acknowledged by providing the source of information beneath the post. This blog has no intention to project itself as an anti-Beall activist.

We have no connection with the mysterious disappearance of him or his blog and the source of knowing the shutdown of the blog is personal observation of Beall’s Blog and early tweets.