Bias against novelty in science: A cautionary tale for users of bibliometric indicators

There is growing concern that funding agencies supporting scientific research are increasingly risk-averse, favouring safe projects at the expense of novel projects exploring untested approaches. This column uses the citation trajectories for over 1 million research papers to examine the impact profile of novel research. Novel papers tend to suffer from delayed impact, but are more likely to become big hits in the long run and to generate follow-up research. The short time windows of the bibliometric indicators that are increasingly used by funding agencies in their decision-making may bias funding decisions against novelty.

There is growing concern that funding agencies that support scientific research are increasingly risk-averse and that their competitive selection procedures encourage relatively safe and exploitative projects at the expense of novel projects exploring untested approaches (Kolata 2009, Alberts 2010, Walsh 2013).  At the same time, funding agencies increasingly rely on bibliometric indicators to aid in decision making and performance evaluation (Hicks et al. 2015).

Research underpinning scientific breakthroughs is often driven by taking a novel approach, which has a higher potential for major impact but also a higher risk of failure.  It may also take longer for novel research to have a major impact, because of resistance from incumbent scientific paradigms or because of the longer time-frame required to incorporate the findings of novel research into follow-on research.  The ‘high risk/high gain’ nature of novel research makes it particularly appropriate for public support.  If novel research, however, has an impact profile distinct from non-novel research, the use of bibliometric indicators may bias funding decisions against novelty.

In a new paper, we examine the complex relationship between novelty and impact, using the life-time citation trajectories of 1,056,936 research articles published in 2001 across all disciplines in the Web of Science (WoS) (Wang et al. 2016).

Measuring the novelty of scientific publications

To assess the novelty of a research article, we examine the extent to which it makes novel combinations of prior knowledge components.  This combinatorial view of novelty has been embraced by scholars to measure the novelty of research proposals, publications, and patents (Fleming 2001, Uzzi et al. 2013, Boudreau et al. forthcoming).  Following this combinatorial novelty perspective, we examine whether an article makes new combinations of referenced journals that have never appeared in prior literature, taking into account the knowledge distance between the newly-combined journals based on their co-cited journal profiles (i.e. ‘common friends’).  Technically, we measure the novelty of a paper as the number of new referenced journal pairs weighted by the cosine similarity between the newly-paired journals.

Applying this newly-minted indicator of novelty, we find that novel research is relatively rare:  only 11% of all papers make new combinations of referenced journals.  Furthermore, the degree of novelty is also highly skewed:  more than half (55%) of novel papers have only one new journal pair, while only a few papers make more and more distant new combinations.  To work with this skewedness, we classify papers into three categories: (i) non-novel, if a paper has no new journal combinations; (ii) moderately novel, if a paper makes new combinations but has a novelty score lower than the top 1% of its field; and (iii) highly novel, if a paper has a novelty score among the top 1% of its field.

In view of the risky nature of novel research, we expect novel papers to have a higher variance in their citation performance.  Following Fleming (2001) we use a Generalized Negative Binomial model to estimate the effects of novelty on both the mean and dispersion of received citations.  We use a 14-year time window to count received citations for our set of WoS article published in 2001 and control for potential confounding factors.  We find that the dispersion of the citation distribution is 15% higher for highly novel papers than non-novel papers (Figure 1A).

We also expect high-risk novel research to be more likely to become ‘big hits’, i.e. to receive an exceptionally large number of citations, defined here as being top 1% highly cited among the articles in the same field and publication year.  We find that the odds of a big hit are 40% higher for highly novel papers than comparable non-novel papers (Figure 1B). 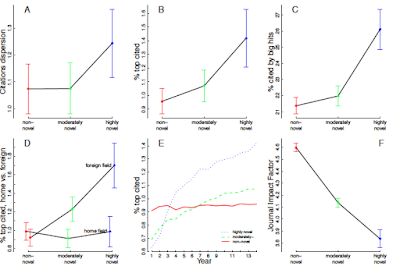 Examining the disciplinary profile of impact reveals that, compared with a non-novel paper receiving the same number of citations, highly novel papers are cited by more fields and have a larger ratio of citations from other-than-own fields, suggesting a greater cross-disciplinary impact of novel research.

This raises the question of the extent to which the big gain profile of novel papers is driven by impact outside their own field.  We find that novel papers are only highly cited in foreign fields but not in their home field (Figure 1D), calling to mind the passage from Luke 4:24: “Verily I say unto you, No prophet is accepted in his own country.”

The finding of delayed recognition for novel research suggests that standard bibliometric indicators which use short citation time-windows (typically two or three years) are biased against novelty, since novel papers need a sufficiently long citation time window before reaching the status of being a big hit.

Taken together, our results suggest that standard bibliometric measures are biased against novel research and thus may fail to identify papers and individuals doing novel research.  This bias against novelty imperils scientific progress, because novel research, as we have shown, is much more likely to become a big hit in the long run, as well as to stimulate follow-up big hits.

The bias against novelty is of particular concern given the increased reliance funding agencies place on classic bibliometric indicators in making funding and evaluation decisions.  In addition, the finding that novel papers are highly cited in foreign fields highlights the importance of avoiding a monodisciplinary approach in peer review.  Peer review is widely implemented in science decision-making, and peer review which is bounded by disciplinary boarders may fail to recognise the full value of novel research which typically lies outside its own field.

If we want to encourage risk-taking, we need to be aware of the inherent bias in bibliometric measures against novel research.  More importantly, we advocate, when bibliometric indicators are used as part of the evaluation process, a wider portfolio of indicators and of time windows beyond the standard window of two or three years.