The inevitable chaos and unpredictability of politics makes trying to achieve policy change a real challenge. But that doesn’t mean academics should just give up. Drawing from policy analysis and public affairs lessons, James Lloyd recommends six steps to get researchers going in the right direction towards achieving policy change.

Last month I wrote a piece for the LSE Impact blog on whether it is realistic to expect UK social scientists to achieve policy change. By recognising the reality of UK policymaking, the piece questioned whether it is realistic to place an expectation on social scientists – or anyone from any field for that matter – to achieve policy change.

The piece seems to have tapped in to some existing vein of concern, and it received a great response both in the UK and, interestingly, in other jurisdictions. Some readers wanted more elaboration on the final points in the piece around how academics can achieve policy change. So, with a blank page and a new word count, here goes.

As with the first blog, this one is written with UK social scientists and UK policymaking in mind. The starting point is someone who has ticked all the basic ‘impact’ boxes: non-technical research summary; press release of any newsworthy findings; a blog post summarising the research on relevant forums; emails notifying potentially interested parties about the research. And it goes without saying that you’ve sent your research to relevant government departments, and responded to any Select Committee that has issued a relevant call for evidence. Put another way, you’ve gone as far as you can with formal policymaking processes and some standard impact-dissemination.

If, after all of this, you still want to achieve a specific policy change, what should you do? What follows are some highly condensed recommendations drawing on two separate professional disciplines: policy analysis and public affairs. Others from these two sectors might draw up things differently, or with different emphasis. But here goes.

The biggest barrier to evidence-based policymaking is still arguably that so much research sits beyond the reach of policymakers behind journal pay-walls. This touches on a big, live debate around the future of academic publishing and open access, which I won’t delve into here. However, if you’re determined to change policy using a piece of your research, it really needs to be available in full, for free, for everyone in policymaking to access, online, at any time. Anything else will undermine your chances of achieving policy change.

Changing policy is easier when you have absolute clarity around the specific, tangible, measurable outcomes you want to change. Can you describe clearly the before/after outcomes you’re interested in? If yes, you can then think: who has the power to change them? Is it something for Westminster, an arms-length regulator, one of the devolved administrations or a council? If you can’t specify your outcomes or who can influence them, think carefully again about what you want to achieve, and how.

3. Finalise your theory of change

By all means, jump into the policymaking world with just your research findings. However, you’re going to go much further and faster if you have some specific policy recommendations to promote off the back of them: a plan. Once you’ve developed some proposals, test them rigorously. Are they feasible to deliver, publicly acceptable and are they likely to be effective? Then test them some more: present them to a policy analyst that works at a relevant charity or interest group body. Get the analyst to pick holes in your proposal. Find out if what you’re suggesting has been tried or proposed before.

Policymaking is in many ways about the stories that different stakeholders tell each other, and not just politicians to the public. These are the narratives that simplify complexity, resonate with people’s understanding, values and view of the world, and motivate them to be interested and support a change in policy. Most policy narratives deploy well-worn stories: inequality between different groups; the UK falling behind international competitors; unacceptable waste. This topic could fill another blog or book, but there are around 12 ‘classics’ that drive policymaking. With accessible research, clear, specific policy recommendations in hand and your ‘narrative’ sorted, you’re ready for the next step.

Yes, you can write to a newspaper, Minister or a politician yourself calling for a specific change of policy. But what will probably be more effective is to have stakeholders active in a policy agenda pick up your research and recommendations, and run with these themselves. In short, they will be your ‘policy entrepreneurs’, who will set about actively trying to change policy, but with all the existing policy and public affairs resources at their disposal, lending credibility, support and heft to the policy change you want to achieve.

So, go and meet with every politician, charity, trade body and professional body that has a stake in your policy interest. Each time, you will probably need to tailor your messages and how you are framing the issue. You’re probably going to go for a lot of ‘coffees’. But, don’t be surprised if your potential allies say: “great, but we are focusing our campaigning this year on this other related issue.” Or, “so important, but it doesn’t chime with the messaging around our key asks currently.” Every stakeholder in the policymaking process has limited time and resource to achieve their objectives, and may have other priorities.

6. Hang out and be patient

If you’ve got to this point, you’ve probably spent around 150+ hours on trying to change policy. But now you have to do two things.

Hang out in policy circles. For example, by going to relevant public policy debates and seminars, and making sure you speak in the Q&A. This maintains and refreshes your networks, keeps your research in people’s minds and keeps you abreast of how your plans to change policy may need to adapt to other developments. If relevant policy events aren’t happening, go back and have more ‘coffees’ with all those stakeholders again. 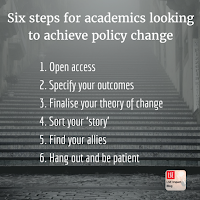 And be patient. Changing policy can take years. In fact, politicians and governments often sit on good ideas until they can be launched with the maximum political gain. When the Prime Minister used his 2015 party conference speech to announce new measures to tackle ethnic discrimination in UK recruitment, he called on research that was six years old. Had Number 10 just come across it? More likely, they’d been sitting on it for 2-3 years – or longer – waiting until the time was right to announce the policy for maximum political impact and gain, helping underpin the PM’s attempt to reframe the character of his government.

And remember, the policymaking process is chaotic and frustrating. If you’re really lucky, you might make huge headway in convincing a Minister of your policy recommendations and research. But, just as the Minister is about to introduce a bill, the Minister may be moved or fall out of favour. Or maybe an election will be called, and whoever becomes the new Minister wants nothing to do with their predecessor’s ideas – in fact, you may be tainted by association. Or perhaps the civil servants you’re dealing with in several departments will suddenly be at loggerheads on some other issue, and refuse to cooperate on the policy you’re trying to change as they engage in that power struggle.

The truth is, hundreds of hours of work can go up in smoke in an instant. This is the inevitable chaos and unpredictability of politics, and unavoidable in trying to achieve policy change. Even when you succeed, whichever ‘policymaker’ takes forward your research or proposals may never acknowledge you or give you credit.

So, don’t be hard on yourself. Changing public policy is tough, and sometimes, really, really tough. And that’s why it isn’t necessarily realistic to expect academic researchers – or anyone – to achieve policy change.