Circulation patterns show books in STEM and social sciences are accessed just as much as humanities books.

Drawing from comprehensive circulation data showing how monographs are accessed across disciplines at the University of Notre Dame library, Parker Ladwig and Thurston Miller challenge the assumption that STEM and social science books are accessed less frequently over time than monographs in the humanities. This data and similar studies can help to improve library services by providing a more informed understanding of collection supply and demand. 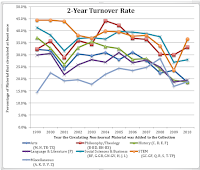 The library is the laboratory for the humanists. Scientists and engineers (STEM) don’t use the library in the same way as the humanities. Humanists browse the collection looking for that gem in books (their primary sources). Scientists and engineers rely on journal literature, not books. An old book in the humanities is almost as important as a new book. STEM want recent books rather than older books. Those studying the social sciences and business find themselves between the two.

We both heard the sentiments expressed in these sentences from many sources, inside and outside the library, over our 20+ year careers. We heard them so often that we accepted those statements as fact. If anyone questioned these ideas then the statements were firmly repeated with a supporting anecdote demonstrating their validity. They are bedrock beliefs of all academic librarians and of many in the academy.

What started out as an exercise to see how the metrics used by libraries that had adopted the Balanced Scorecard would affect our library resulted in our questioning those bedrock beliefs. The exercise also resulted in a paper that concluded there is actually little difference between the initial circulation patterns of books in different subjects.

We spent several months gathering the data and experimenting with how to visualize the data and were surprised by what we saw. The specific benchmark was that 60% of all new monographs (excluding non-circulating materials) should circulate within two years of the time of cataloging. Call this the 2-year turnover rate.  This seemed like a stretch but not too unreasonable given the results of the 1979 University of Pittsburgh study (Pitt Study). That study reported that after seven years ~60% of the collection acquired in 1969 circulated at least once.

The chart shows that no broad subject designation had a 2-year turnover rate greater than 45%. For the material added in 2010 there is only one subject, Human Anatomy (QM), that exceeds 60%, and Notre Dame doesn’t have a medical school.

Based on the 2-year turnover rate we wondered how to increase the percentage. We could improve the advertising of books to see if that would increase their circulation. One idea was to take books that had been in the library for 5-10 years that had not circulated and put them on the new book list and the new book shelf to see if they circulate.  This has worked for public libraries.

The library could reallocate spending from the subjects with low rates.

We also wondered if 100% circulation after 2 years (or 5 or even 10) was desirable.  The library’s overall 10-year turnover rate approached 55%.  However, there were some subjects over 70%, but we also noticed that some of those subjects were the ones that had customer complaints about the library collection lacking material.  We had heard that some medical libraries with turnover rates above 80% heard complaints from their customers (because they were few books to browse)

Of course, what the customer wants may not fit with the teaching and research mission of the University.  Even though anything about cosmetic surgery circulates within 2 years of adding it to the collection, we should be very selective in acquiring more because there isn’t teaching or research in that area at this University.

The STEM and Social Sciences & Business 2-year turnover rates were the highest on the chart. (The letters in parentheses are the Library of Congress Classification classes used in our library.)  One of the tenets of our profession is that STEM customers, and to a certain extent Social Sciences & Business customers, use journals not books.  It was surprising to have a metric showing heavy usage of science and engineering books during any period.  When one looks at the underlying data, it’s clear that the first 12-18 months after acquisition are critical for the turnover rate, regardless of subject.  Could subjects generally having branch libraries have higher turnover rates because the books are closer to the customers? Are rates for the humanities lower because the main library is more distant from customers’ workspaces?

All the trend lines had a declining (negative) slope, save one (Miscellaneous). The trend line slope for Philosophy/Theology was almost flat but still slightly negative. These negative slopes mirror the decline of many other library metrics, e.g., number of reference questions asked, number of circulations, number of items placed on the course reserve shelf. The use of almost everything physical was declining, while almost everything virtual was increasing.

Our virtual collections have increased in size and they have increasing usage but have our services moved into the virtual at the same pace?  This requires a change in skills.  We need more librarians who have an advanced subject degree and/or know programming, data management, geographic information systems, informatics, etc.  Therefore, the library should be hiring people with those skills and retraining existing employees.  In other words, the library when hiring should de-emphasize generalist librarians (or reference librarians) and focus on specialists.

This gets to the heart of what means to be a librarian and the purpose of the library.  Are libraries about the acquisition and preservation of the print book/journal, or are libraries about connecting people to knowledge? When most people think about libraries or librarians, they think of the former and not the latter. Libraries are still defined by the print book, especially in the eyes of our customers. Maybe this declining slope also demonstrates the impact of the web on libraries.

As we talked about the results with fellow librarians and customers, we were continually reminded of the Ladder of Inference and the confirmation bias present in the reflexive loop developed by Chris Argyris and popularized by Peter Senge in his book The Fifth Discipline.  The second rung of the ladder is where one selects the data based on what one expects to see.  This brings us back to the sentiments expressed in the first paragraph, sentiments that are bedrock beliefs or conventional wisdom for many. Very few people (inside or outside the library) want to believe the data because the data challenges assumptions. As a result, anecdotes are used to refute the data or the data is ignored.

Every field has bedrock beliefs, and practitioners use those beliefs to make decisions quickly. One expects that this conventional wisdom matches the data. When it doesn’t match, then decisions will be more costly to implement. For example, at Notre Dame the library is planning a remote storage facility for ~600,000 monographs. Anyone needing a monograph in storage will have it delivered to their campus mailbox. There were two proposals for identifying material to put into storage. The first mostly relied on conventional wisdom, keep most of the humanities monographs on the browse-able shelves and send most of the science, engineering, business, and social science monographs to storage. The second relied on data, send to storage monographs that hadn’t circulated in 10 years. We determined the first option would result in 2.2 times the number of requests and therefore needed roughly 2.2 times more staffing than the second option.

Libraries have limited resources so we need to get the biggest bang for our buck.  Using data instead of relying on conventional wisdom would not only stretch our resources further, but also inconvenience our customers less.  What does the data tell you?